Just to let you know about the Bike Jumble in Park Slope, this Sunday:

The event will be held in the park, on Fifth Avenue between third and
fourth streets, in Park Slope, Brooklyn, a center of bicycle commuting
in New York City .

At this one-day-only
event, private non professional vendors will be on hand to sell
bicycles, bicycle components and clothing to the public. Low cost
bicycles will be available to beginners young and old. In fact,
concurrently with the Jumble, riding lessons will be offered that day
to kids!

There will be an area where enthusiasts can sell and trade bicycle parts.
Attendees looking for kid’s bikes, cruisers, BMX, mountain, racers,
fixed gears or any wheeled pedal powered machine will find it here.

There will also be a classic bike show highlighting beautiful machines with an emphasis on bikes with strong ties to New York .

New York City based cycling oriented companies such as Outlier, selling
their US produced high tech yet classic commuting wear, and Bicycle
Paintings by Taliah Lempert, selling, t-shirts, posters and coloring
books celebrating famously beautiful bicycles, will be there.

Tables for private vendors will be available, pending availability, until the
day of the event. For more information go to www.nybikejumble.com .

The event will begin at 10 AM and will close at 2PM. 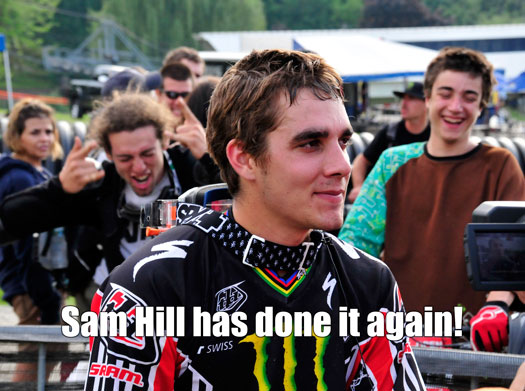 Vernon, New Jersey (May 15, 2009) – The seventh annual U.S. Open of Mountain Biking, which will kick-off on May 22nd, has become a national benchmark for U.S. mountain bike events boasting attendance by many of the world’s top racers. Against the backdrop of nearly 50 custom built mountain bike trails, the U.S. Open of Mountain Biking plays host to amateur and professional racers from across the globe all looking to capture the most prestigious title in American gravity racing.

Reigning U.S. Open champion Steve Smith will be looking to defend his title against a stacked field of international contenders. "I'm really looking forward to coming back to Diablo and defending my 2008 U.S. Open title,” said Smith of Team Evil Bikes/MS-Racing. “The U.S. Open track is sick and so are all of the other trails that I've ridden there.  It's always a really good time."

After narrowly being edged-out by Steve Smith in 2008, former World Champion Sam Hill is gunning to dethrone Smith and claim the 2009 U.S. Open title.  “I am really excited about attending the U.S Open this year. It is always a really fun track to ride and the atmosphere is more relaxed than the world cups. I'm also looking forward to riding my new Specialized at Diablo and seeing how it handles the rough terrain.”

Fresh off of a strong 4th place finish at the La Bresse, France World Cup, British Downhill phenom Brendan Fairclough states: “This will be my second U.S. Open and it is an event that I have been looking forward to.” To earn a top spot at the U.S. Open, Fairclough will need a strong showing to fend off top world cup rivals including teammate Sam Hill, Gee Atherton, Dan Atherton, Bryn Atkinson, Brian Lopes, Jared Rando and Kyle Strait to name a few.

Returning in 2009 to capture the title that eluded her in 2008, is highly decorated pro racer Kathy Pruitt (Jamis Bicycles). Pruitt will be trying to outpace a talented women’s field that includes Olympic bronze medalist Jill Kintner, Melissa Buhl, Katrina Strand, among many others as she attempts to capture the women’s title.

To complement the highly contested downhill discipline, the U.S. Open of Mountain Biking is introducing a new Giant Slalom discipline featuring a $7,500 pro-purse and nearly $15,000 in amateur prizes. Designed by the Diablo Parklogic Team, the new Giant Slalom course features a series of huge banked turns careening down the lower mountain of Diablo Freeride Park.

In addition to high-stakes racing, the U.S. Open is an excellent opportunity to witness the world’s top racers performing in action. Spectating is free of charge and there are many vantage points to view fast-paced racing including the popular JBL Sound Garden.  During the final competition rounds, the JBL Sound Garden located at the infamous Rock Garden section will feature a JBL Audio system, where guest announcer MC Splϋgie will be providing the play-by-play.

Athletes interested in competing in the 2009 U.S. Open of Mountain Biking are encouraged to register online immediately to reserve their spot in the event. Online registration will close Wednesday, May 20th!

For more information about the 2009 U.S. Open of Mountain Biking, please visit www.usopen-mtb.com .

So what are you doing this weekend? Tried of having the same the old BBQ at your Aunt Bertha's, why not skip that and come to Diablo Freeride Park witness the biggest race to start the year. Where else can you see the World's Top Pros race neck to neck with your local unknown Downhill Racer?

Go to BNQT for more videos.